Nelson Piquet In The BT-52, Hockenheim Pits In The Rain – German Grand Prix 1983 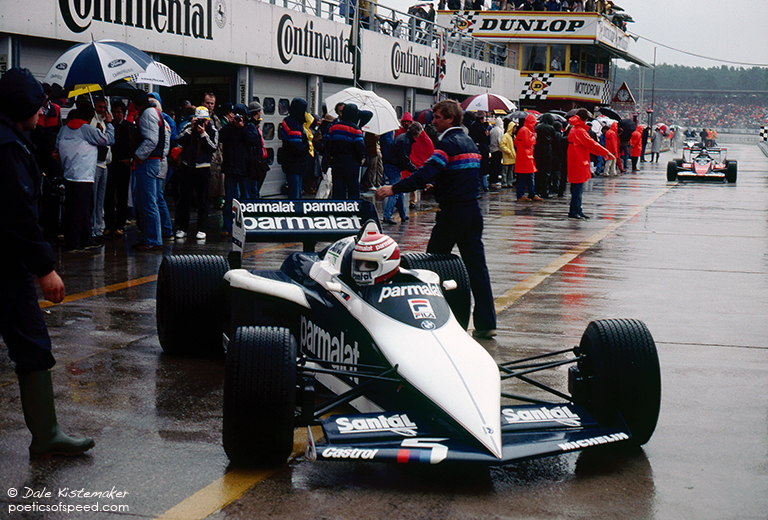 D.K. What do you expect of the driver?

G.M. That is quite complicated.  Again, that’s a two part thing.  Having a driver that can interpret the car, has a feeling for it.  He has got to imagine the forces, what’s happening – if it’s disastrous understeer, or just a bit of understeer, to find out what is causing the understeer, or oversteer – to fix it. But these days it’s such a complicated circus, Formula One, it goes a bit beyond that.  I think you almost have to develop a friendship with a driver for a truly good partnership.  You need to trust each other, to get the most out of any design.  You can have the best car in the world, and if you don’t have a good relationship with the driver you will never get the best out of the car.

D.K. I’ve always respected Nelson Piquet and this year he seems to have become better.

G.M.  Well, yeah.  We’ve grown up together.  Helped each other.  He helps me by doing his interpretation very well, and he gets helped in return by me having good information, so I can make the car faster.

Nelson Piquet won the 1983 Formula One Drivers Championship in Murray’s Brabham BT-52.  Gordon Murray designed cars won 22 Grands Prix during his tenure with Brabham.  In 1987 he moved to McLaren Cars and in addition to his work with their Formula One team he conceived the McLaren F1, considered by many to be the greatest sports car ever designed.  In 2007 he established Gordon Murray Designs penning the T-25 and T-27 city cars.

My profound thanks to Gordon Murray, who, in the intensely competitive world of F1, took time out of a demanding schedule to talk about the aesthetics of race car design and always answered my technical questions with patience and clarity.

No part of this interview  may be used or reproduced in any manner whatsoever without written permission from the Long Beach Museum of Art, except in the case of brief quotations embodied in critical articles and reviews.